CASPIAN JAMIE LEAD SPEECH AND LANGUAGE THERAPIST AT ASC HEALTHCARE HONOURED AT SHINE A LIGHT AWARDS FOR HIS COMMITMENT TO DEVELOPING COMMUNICATION. 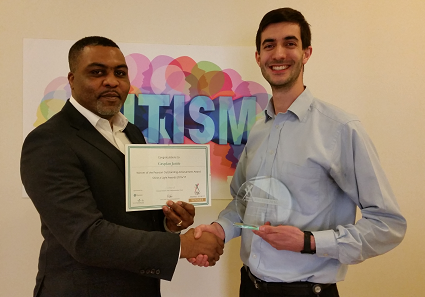 Caspian Jamie has been awarded the Pearson Outstanding Achievement Award at an awards ceremony in London, for his dedication to providing fantastic speech and language support in Greater Manchester. The 2017 Shine a Light Awards, run by Pearson in partnership with The Communication Trust, took place on 23rd March 2017 and was hosted by singer and theatre star Gareth Gates.

The Shine a Light Awards is a national awards scheme that celebrates innovative work and excellent practice in supporting communication development.

Caspian said: It’s such an honour to win the Outstanding Achievement Award.  It’s a privilege to work in such a fantastic field. I am incredibly passionate about the work that I am involved in to support individuals communication.”

Gareth Gates, host of the 2017 Shine a Light Awards, said: “The dedication of Caspian is outstanding. Being able to communicate with confidence is often taken for granted but for many it is an everyday struggle. Caspian should be extremely proud of his award.”

Chris Hall, Director of Clinical Assessment at Pearson, said: “Congratulations to Caspian for his Pearson Outstanding Achievement Award. This is the fifth year we have run the Awards and we remain blown away by the standard of applications.”

Octavia Holland, Director of The Communication Trust, said: “Congratulations to Caspian and everyone who triumphed at the Shine a Light Awards. These Awards highlight the very best practice that is taking place in settings across the country.”

Caspian was also a highly commended finalist for the Communication Champion Award.

Congratulations from everyone at ASC Healthcare.  We are proud to have Caspian Jamie as part of our amazing team.

Added By: David Ramsbottom | Posted In: